Hopkins Gulch Rd. and the Mercury 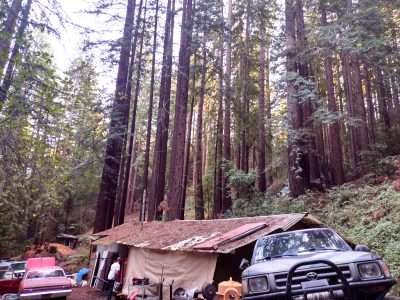 I’m writing this column on Tuesday November 16th, so its not even Thanksgiving yet, but the holiday season will soon be in full swing and our thoughts of rodding and racing will take a back seat to all of the things we love (and hate) about the holidays. I was telling Jeff Nagy the new owner of Roddin’ & Racin’ about one of my recent Car-Nut-Ball adventures. He said OMG Jerry you have to write about it in your Points N Plugs column, so here goes.

There were three interesting things that happened in the last 30 days. #1, I sold my 1965 Nova station wagon at the Mecum Las Vegas auction. I let it go at No Reserve, because it was time to take my lumps and move on. It sold for $13,000. Lower than l hoped for, but more than l expected, so l was totally fine with the experience. #2, l still had the ’63 Nova four door Bracket Racer to sell. Being a four door is bad enough, but this car was set up for racing. It has a four point roll bar, a simple electrical switch panel with starter button between the two racing seats, no turn signals and no brake lights. Yes it was street legal, but not really a street cruiser. I was asking $8000, because it actually was a pretty fast little car. After close to two weeks on Craigslist with zero calls, l started looking for something l could trade for. That something turned out to be a running and driving 1963 Pontiac Bonneville two door hardtop. It was far from perfect, but l thought it might be easier to sell than the Nova, if l put some spiffing and cleaning effort into it. The owner was OK with a straight trade, so we set up a Tuesday switch date and the deal was on. I always say that my tombstone should say “TIMING IS EVERYTHING” and wow could that statement be SO TRUE in this example. On Tuesday morning l went to my storage facility to get my trailer, but the driveways had just been re-paved and the lot was closed until Wednesday. On Wed. morning l picked up the trailer, loaded up the Nova and headed out to pick up the BIG Pontiac. I had literally only driven a mile or two, when my cell phone rang. A lady was calling about the ’63 Nova. Long story short, she excitedly bought the Nova on the spot. I always say that a deal is not a deal until the deal is done, but l still felt bad about the Pontiac guy, so l sent him $250.00. He was thrilled and it made me feel better too. #3, is actually the story Jeff wanted me to tell, so here goes.

As soon as the lady picked up the Nova, l started looking for an old Mustang or old Muscle era car for cheap, like less than $7000.00 and yes there are cars out there in that price range. Five to eight years ago, you could buy a pretty decent ’65 to ’68 Mustang in that $10,000 price range, but not today. For that amount, you better have your tetanus shots up to date, because you will be doing a lot of serious rust repair and the car may not even have an engine. Any compact to mid-size two-door rust free cars from that era are hard to find and harder yet to buy cheap. In my usual early morning Craigslist searching, l saw a 1966 Mercury Comet two door sedan for $5900.00. The car caught my eye at first just from the price. The idea of a decent running & driving RUST FREE ’66 Comet V-8 automatic two-door seemed too good to be true. Then l realized that this car was way down the road from the middle-of-nowhere Southwest from San Francisco. It was so far off of the beaten path, that the owner’s cell phone only worked when he was near the little town of Boulder Creek, CA. it didn’t work at his home-site. Jonathon and l managed to talk a few times, but texting turned out to be the best method. To most people, driving 750 miles to buy an old car is crazy (CAR-NUT-BALL) but to me, the trip and the adventure is part of the fun. Ending up with a cool car is the icing on the cake. At the price we agreed to in advance, l was definitely worried that the car would not be as described, but for the price, l was willing to take the chance. Turns out l was right, the car was not as described, IT IS WAY BETTER!!! Absolutely no rust, the body panels are dead straight and already prepped for paint. The interior is completely usable as is and the nice running 302 V-8 engine has been fitted with a modern Sanden A/C compressor already mounted and spinning with the engine. There were no other A/C components, but those are the easy parts. The tires are junk, but there are 5 perfectly good 14″ Ford wheels. The side windows roll up and down like butter and both front and rear glass are perfect. A ’66 Mercury Comet was not even on my radar as a possible cruiser car, but I’m very excited about what l can do with this car.

The trip to Boulder Creek was exciting to say the least. At first, my oldest friend in the world Terry Joy was going to make the trip with me, but after a few days of reality, that l was actually going to go, l got the sense that he wasn’t as excited as me, plus, he had friends in town all week and as soon as they left we were going to hit the road. I asked him if he was sure he wanted to make this trip and he was honest and said, the week had been pretty stressful and waiting until the next crazy trip would be better. I told him no harm no foul and l hit the road in three hours. I left at around 5:30pm to make sure I’d miss the L.A. traffic, which l did. I worked my way over to the 101 freeway heading north from L.A. At around 1:am l stopped at a little town north of Santa Barbara and caught 4 hours of sleep in my camper. When l hit San Louis Obispo the choice was, take old Hwy 1 through Big Sir and Monterey or stay on the 101 to near Santa Cruise, where l would need to get back to old Hwy 1. l decided on old Hwy 1, which in hindsight was the wrong decision. I forgot how long and twisty and slow that 135 mile road into Monterey was. Driving a pickup truck with a camper on the back and dragging an empty car trailer through those seemingly thousand switchbacks with posted speeds as slow as 15 miles per hour was a white knuckle ride much of the time. It was so nice to see 60 miles an hour on my speedometer as l headed into Monterey and then into Santa Cruise. 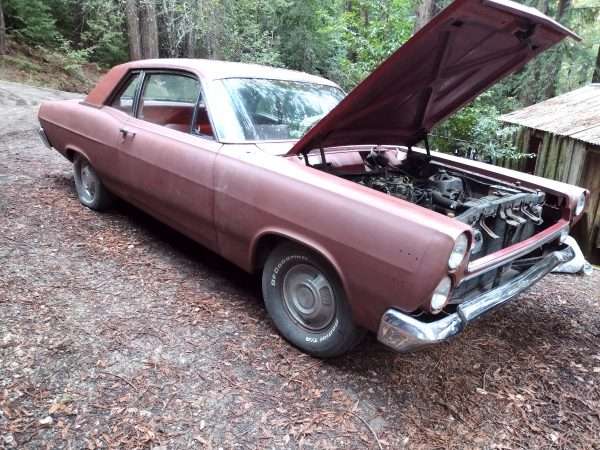 The only address Jonathon gave me in Boulder Creek, was Hopkins Gulch Rd. at Bear Creek Rd. I wondered what that meant and when we met up in downtown Boulder Creek, he suggested we drive out to his property in his big Dodge 4×4 dually pickup truck. HHHMMM what have l gotten myself into? Let’s just say that Hopkins Gulch Rd. where his property is, required a 4×4 vehicle to get back in there. The banjos from the movie Deliverance were dancing in my head on the entire half mile goat trail l mean road?? Jonathon’s property was at the end of Hopkins Gulch Rd. deep into the redwood forest. His little cabin would have literally fit on the bed of my car trailer. There were several old cars parked on his land, but the Merc stood out like the ray of sunshine that never hits the ground on this property. Jonathon is a relatively young man, probably younger than 40, and has big plans for his little piece of heaven. Selling this Mercury and a very nice Mustang will allow him to start construction on his new log home. After l inspected the car and we did our deal, l asked him if he would drive the Mercury down the hill and back to my truck and l would drive his big Dodge truck. He cautioned me to be careful when turning to cross a little bridge. Oops I didn’t take the correct angle and didn’t swing out far enough to make the sharp right turn onto the bridge. No problem just stop, go to reverse, back up, and hit it again,. That’s all good if you can find reverse, but l couldn’t and was worried that if l went forward more than a few feet the big Dodge would be in the ditch, so l just sat there hoping he would realize l wasn’t following him. He showed up in a few minutes, laughed a little and drove the Dodge to safety. The 750 mile trip home went smoothly, this time taking the 101 freeway all the way back to L.A., again late at night, missing the horrible L.A. traffic. I won’t say this was the trip of a lifetime, but it certainly falls into the very exciting and interesting category. Hey, when you’re a CAR-NUT-BALL trips like this are just part of the ride.