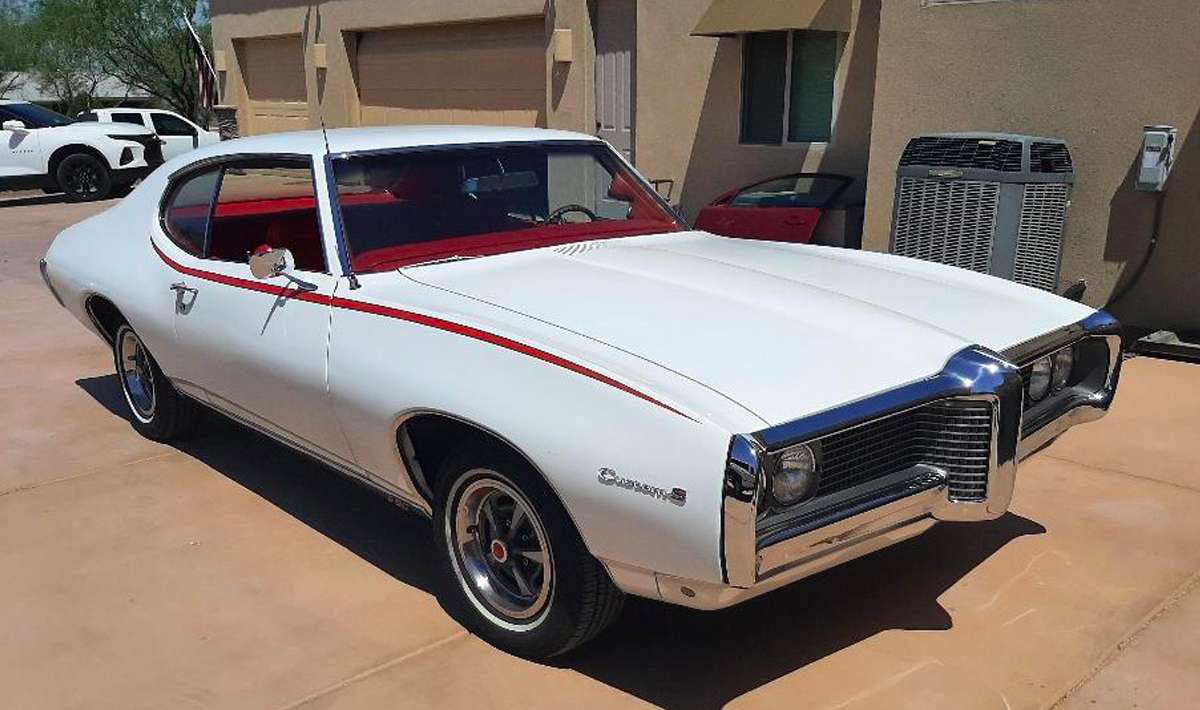 Phil Cocussa and his California Muscle Cars shop built amazing cars from their Southern California shop for several decades. The shop is now located in North Phoenix where they are still building and repairing cool cars. Here are four examples; A 1971 Corvette with LT1 power has been fitted with a new set of Doug Thorley ceramic coated side-pipe headers and new heat shields are also being installed. The Vette’s original Holley double pumper carburetor has been fully rebuilt. The rear suspension is being fully rebuilt as is the differential, that’s being rebuilt at Arizona Differential Specialists in Phoenix. TAD in Phoenix is re-building and balancing the driveshaft and half shafts and all-new Spicer heavy-duty U-joints. A pair of 1970 Ford Torinos are receiving a host of performance upgrades. The yellow Torino GT is powered by a 351 Cleveland V-8, that’s been stroked to 408 cubic inches. The shop is completely rebuilding the front suspension and installing Wilwood front disk brakes. Under the hood, they have done a lot of re-wiring and some under the dash as well. They’ve installed a new Auto-Meter tachometer and a Summit Racing three gauge pod to better monitor the engine. The blue Torino is in the process of a complete bumper-to-bumper restoration with many performance upgrades to the suspension, brakes, electrical, etc. The 351 Cleveland has also been stroked to 408 cubic inches. The California Muscle Cars crew will also be fully rebuilding the engine, including new aluminum cylinder heads. A great-looking and rare 1969 Pontiac Custom S has been in the shop several times for a variety of mechanical repairs and upgrades. Today it was there, for a few minor repairs like the dash lights and turn signals.

Shop owner Phil Cocuzza is an active NHRA drag racer, who has set scores of National records over the years. He currently races in the Competition Eliminator class with his immaculate 2010 Chevy Cobalt that runs in the A/ SMA (A Super Modified Automatic) a very fast class. Phil had the car built by EasTexas Race Cars several years ago. He sold it but regretted it and five years later he bought it back. Amazingly, the car is still beautiful and clean just the way Phil remembered it. This car weighs 2750 pounds with Phil in it. It has a full racing chassis including a Funny Car style roll cage, which is required for a car that does the quartermile in 7.80 seconds at 175 miles per hour. The engine is a purpose-built full race 397 cubic inches Chevy small block, with splayed valve aluminum cylinder heads. It features all of the finest go-fast parts including an HRE custom fabricated intake manifold, that’s topped off with twin Braswell-built 1150cfm competition carburetors. The engine makes 1100 horsepower. The transmission is a full race Pro Trans three-speed Mopar 727 based automatically. The torque converter is a custom-built A-1 7inch converter that stalls up to an amazing 9500 RPM. At the recent Lucas Oil points race in Dallas, Phil qualified #5 and would have been number one, except for some starting line tire slip. He now has a brand new set of Goodyear 2051 bias-belt slicks, mounted on custombuilt Bogart super light weight beadlock wheels. Wife Kim Cocuzza also raced in Dallas with her ‘69 Camaro in the Stock Eliminator class and qualified #1 out of over 80 cars. 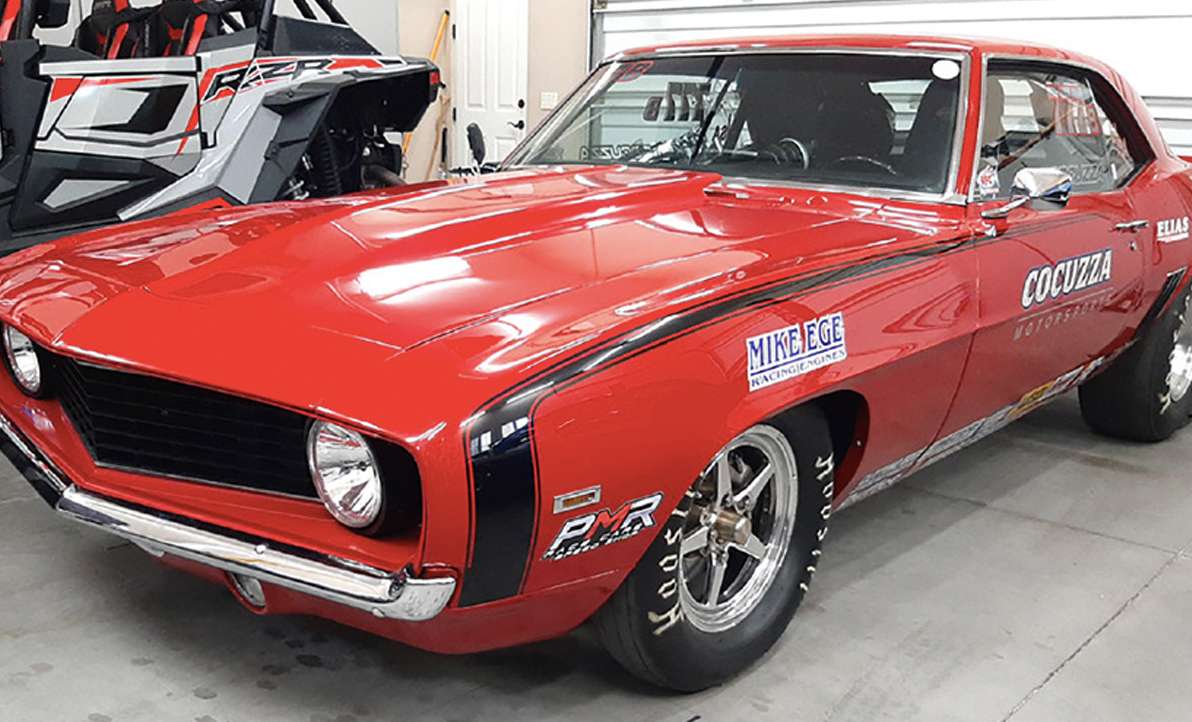 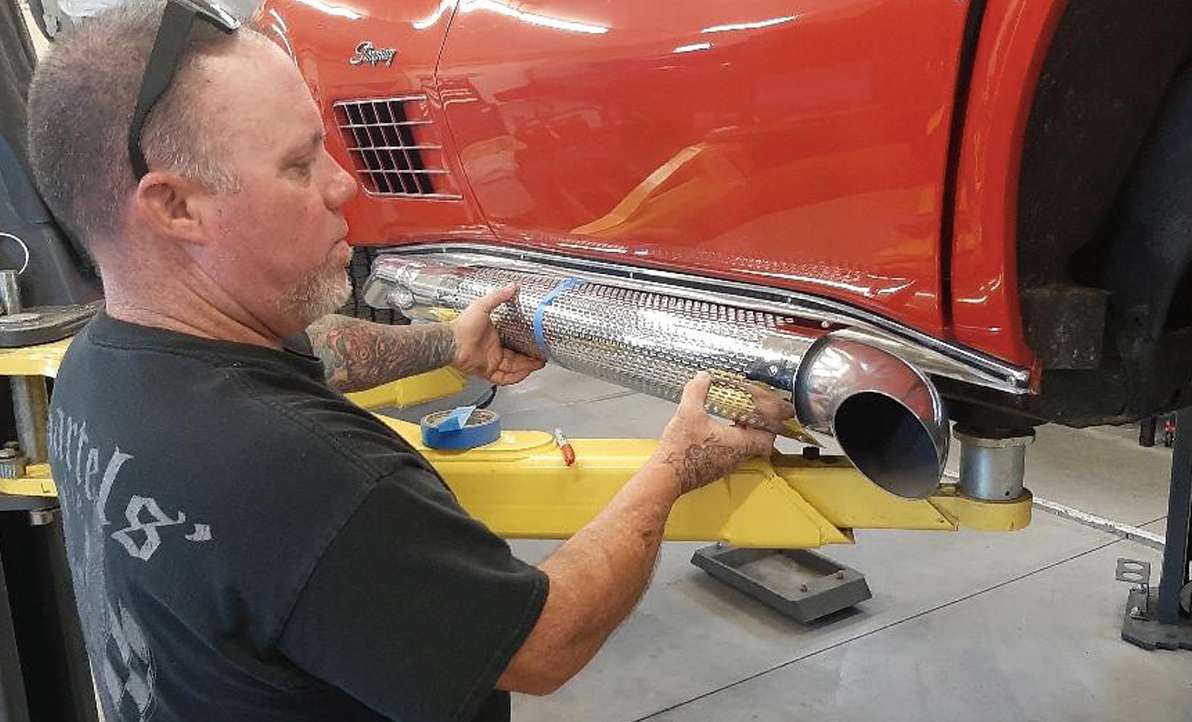 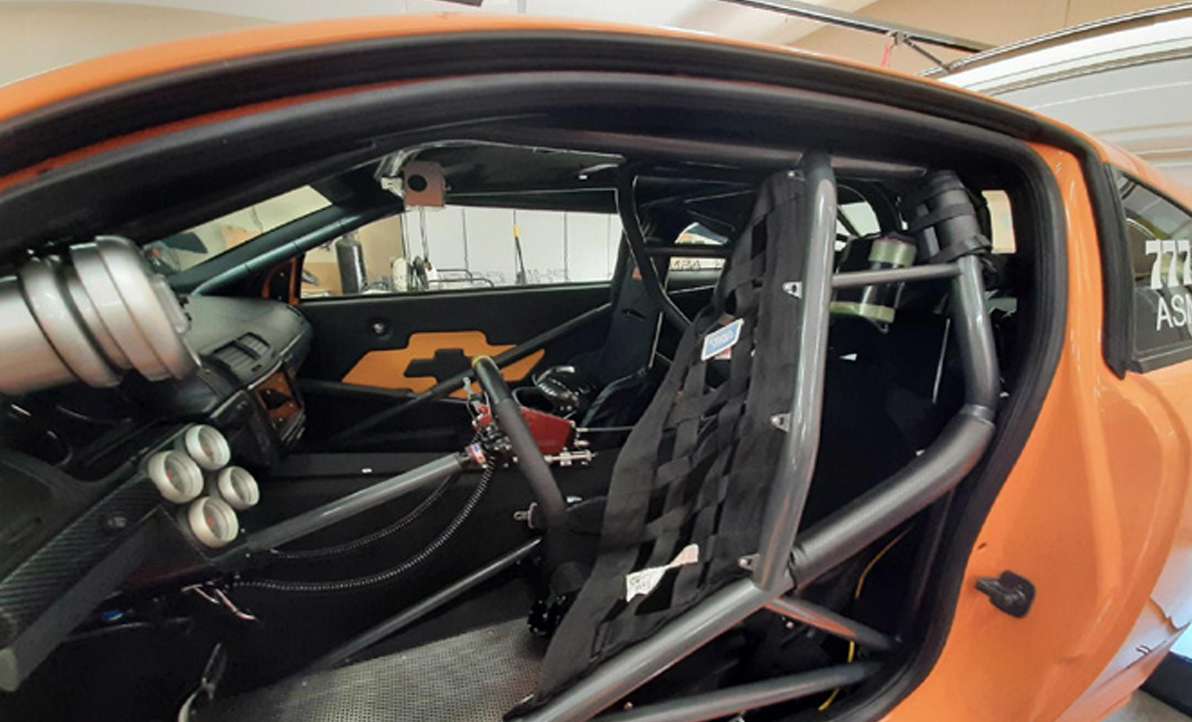 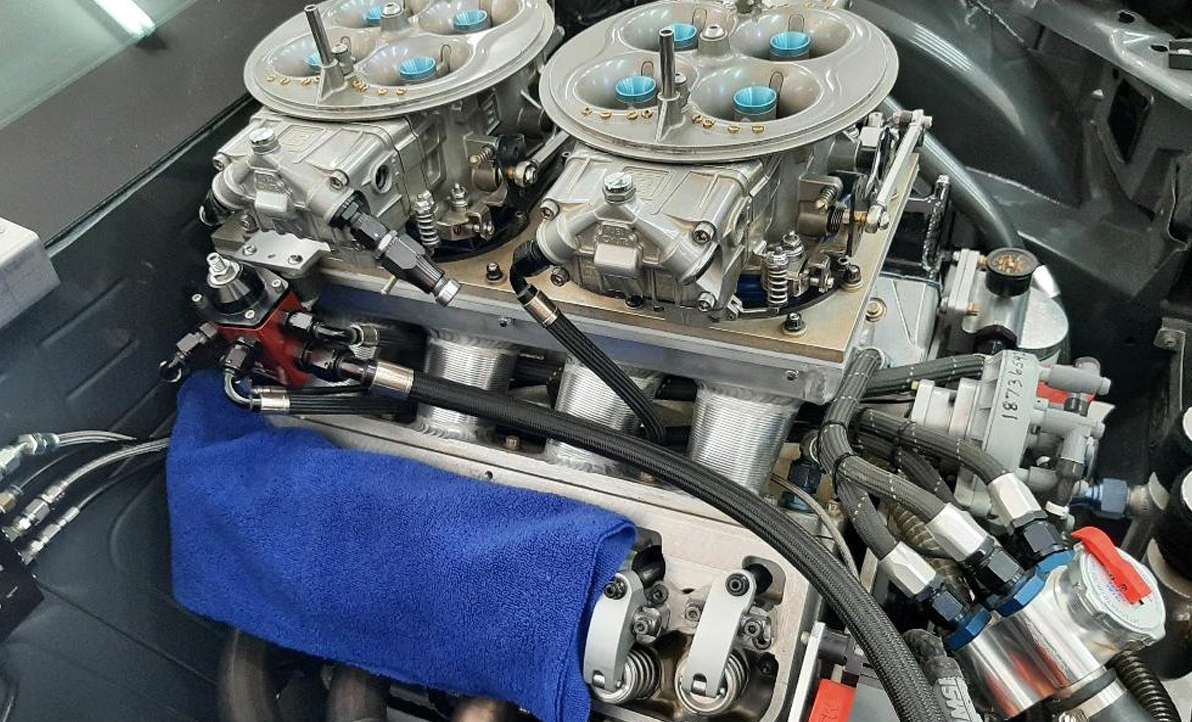 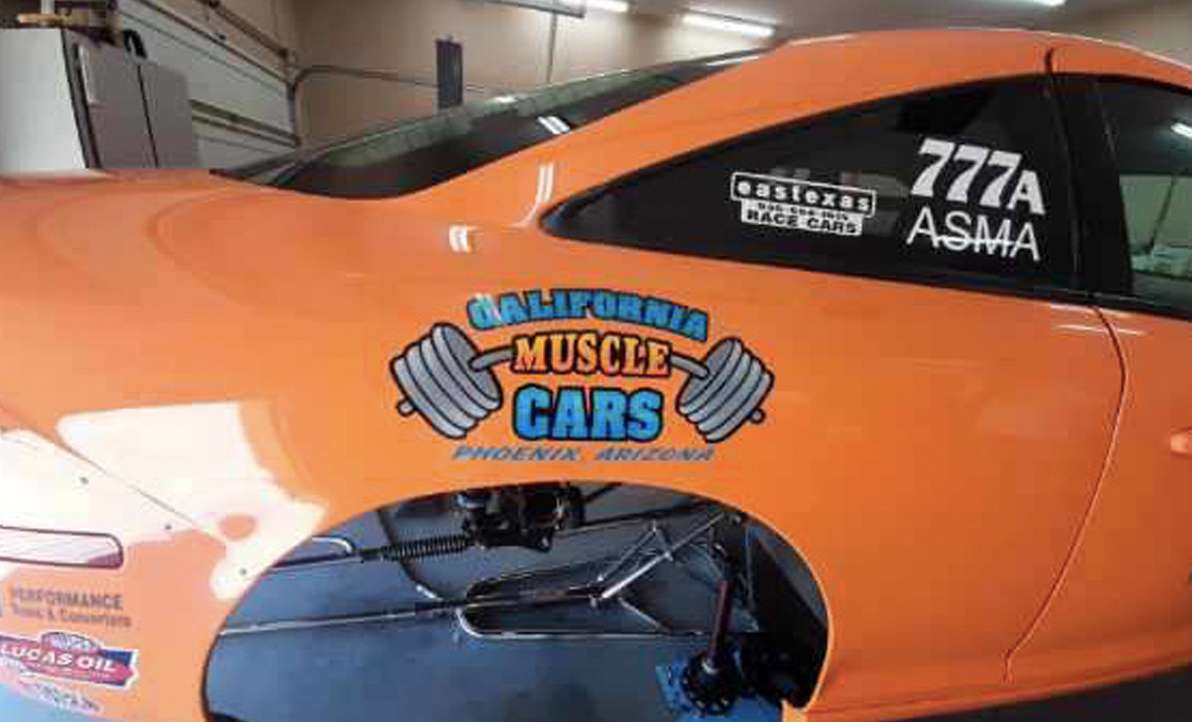 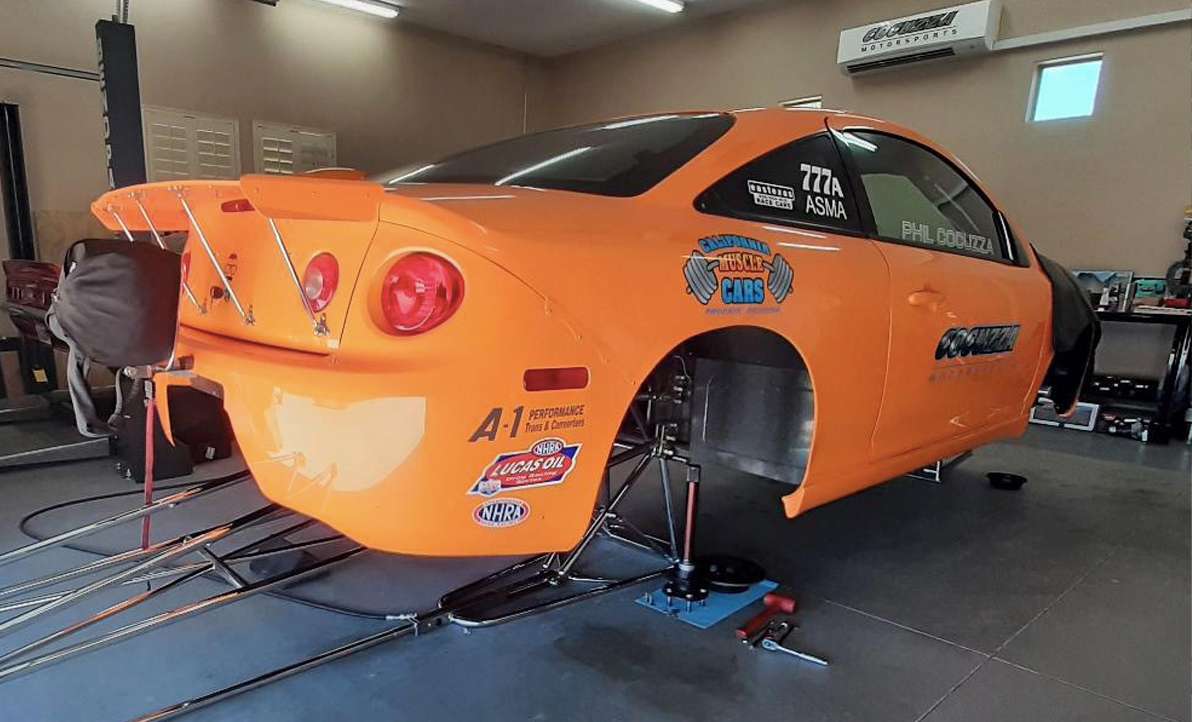 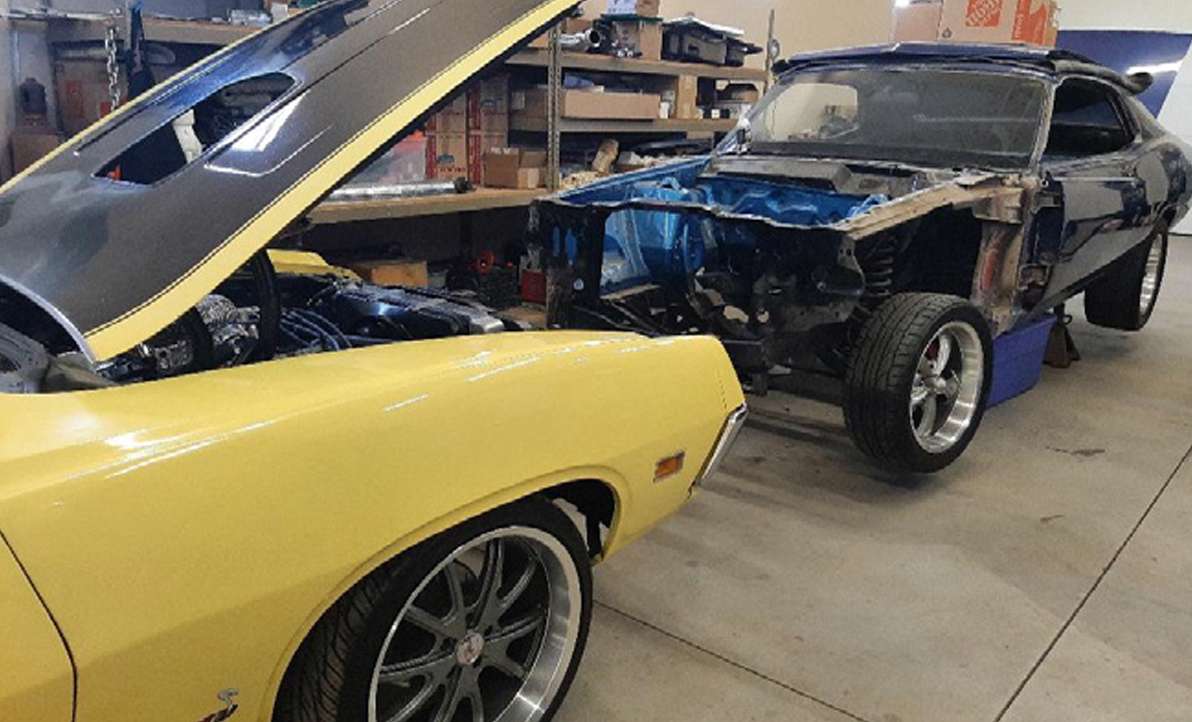