Here’s a little story about something mechanical l had never done before.

I won’t go into my normal bla-bla-bla about the summer heat, it wouldn’t change anything, we all know what’s coming. So, here’s a little story about something mechanical l had never done before. Actually, l had done a few simple wiring related things over the years, but nothing serious. I always stayed away from automotive wiring because it seemed to complicated and I’d heard the stories of melted wires or worse yet fires just from wiring mistakes. This project is about my 4 door Street/Strip 1963 Chevy Nova. A few weeks ago l found an amazing slightly used custom built aluminum radiator with dual Spall electric fans built into a custom fan shroud. The Nova has a mild built 327 small block V-8, with an original style radiator with flex fan on the engine and no fan shroud. When street driving, as soon as slower speeds were involved, the temp gauge would quickly rise to over 210 degrees, so l kept my eyes open for a custom radiator like this. This Craigslist found custom radiator was a perfect fit for the Nova and to me $225.00 was a bargain considering that custom building it could easily cost over a thousand dollars. Wiring up the dual fans is the biggest wiring job l had ever attempted.

The simple install would have been to link the two fans into one switch, job done, but l wanted to have more control over these powerful fans. My cousin Ed Gilbert and friend Vic Spitali from Spitali Motorsports (520- 616-7097) near Marana AZ. both advised me to use an electrical relay between the switch and the fans. The relay has five wire terminals attached, that fact alone almost scared me off, but l was determined to do this the right way no matter what. Draining the water into a catch pan and removing the old radiator took about 30 minutes because the lower radiator hose didn’t want to give up its grip on the radiator. The radiator support housing on this Nova had already been enlarged to support a V-8 engine. I knew the new aluminum radiator would fit, but was still amazed at how perfectly it fit after removing the old flex fan. I simply had to enlarge one existing hole on the driver’s side of the support frame and had to use a length of wire on the passenger side. The wire deal wasn’t the perfect solution, but it was an effective solution, after all this is a rough little Street/Strip 4 door Nova.

With the new radiator fully plumbed and installed, it was now time to tackle the scary electrical part. My first decision was to make the job even more challenging, by using two separate relays and two separate switches. By doing that, l could use only one fan when one fan was enough. I also liked the one fan option while drag racing or letting one fan run to cool the engine between drag strip runs to save the battery. I really had no clue how to wire those relays, but l knew that Vic Spitali did and he gladly helped me by phone. He gave me a simple guide that matched up with the tiny little numbers on the back of each relay. With those numbers, l made up my own hand drawn sketch that l could refer to for each terminal. I used exactly one dozen female crimp on wire ends for this job and one male wire end. There were no spliced wires or redneck short-cuts, l wanted this job to be done the correct way. The Nova already had a switch panel between the seats and l found the wire for one switch that went into the engine compartment. That became fan number two and using my wiring sketch, it was simple to wire up the relay and the fan. First test, it worked perfectly. For fan number one l wanted a lighted switch just as a reminder. I already owned a brand new still in the shrink wrap package switch, with three terminals. l didn’t want to bug Vic again, so l did the old Youtube search, drilled the proper sized hole in the dash, wired up the switch, then wired up the 2nd relay, did my test and walla fan number one roared to life. I flicked on fan number two and together they sounded like a mini tornado in the engine compartment. Ed and Vic had both told me to make sure the fans were pulling the air through the radiator toward the engine. One fan was not blowing right, so a simple switch of the two fan wires solved that issue.

I must admit, because of my lack of confidence in doing this wiring job, l took the old measure twice, cut once system and measured 4-5 times before doing anything. Bottom line, it took at least six hours to finish this entire radiator and relays and switches job. It makes me smile though, knowing that with help from Vic Spitali and Ed Gilbert (especially Vic) the radiator looks great and works great and l have complete control over those powerful Spall fans. Going slow, double and triple checking everything and there were no melted wires or fires has given me boosted confidence for taking on the next mechanical challenge. That challenge was getting the master On-Off switch mounted on the rear of the Nova to work properly. The On part worked fine, but the Off part would not stop the engine from running. Another quick call to Vic who asked me to send a photo of the starter solenoid that’s mounted inside the car. He advised me to run a new 10 gauge wire from the solenoid to the battery side of the On-Off switch. That wire would prevent the alternator from sending power to the engine when the switch was turned to the Off position. I send HUGE THANKS to Vic Spitali and to my cousin Ed Gilbert!!! 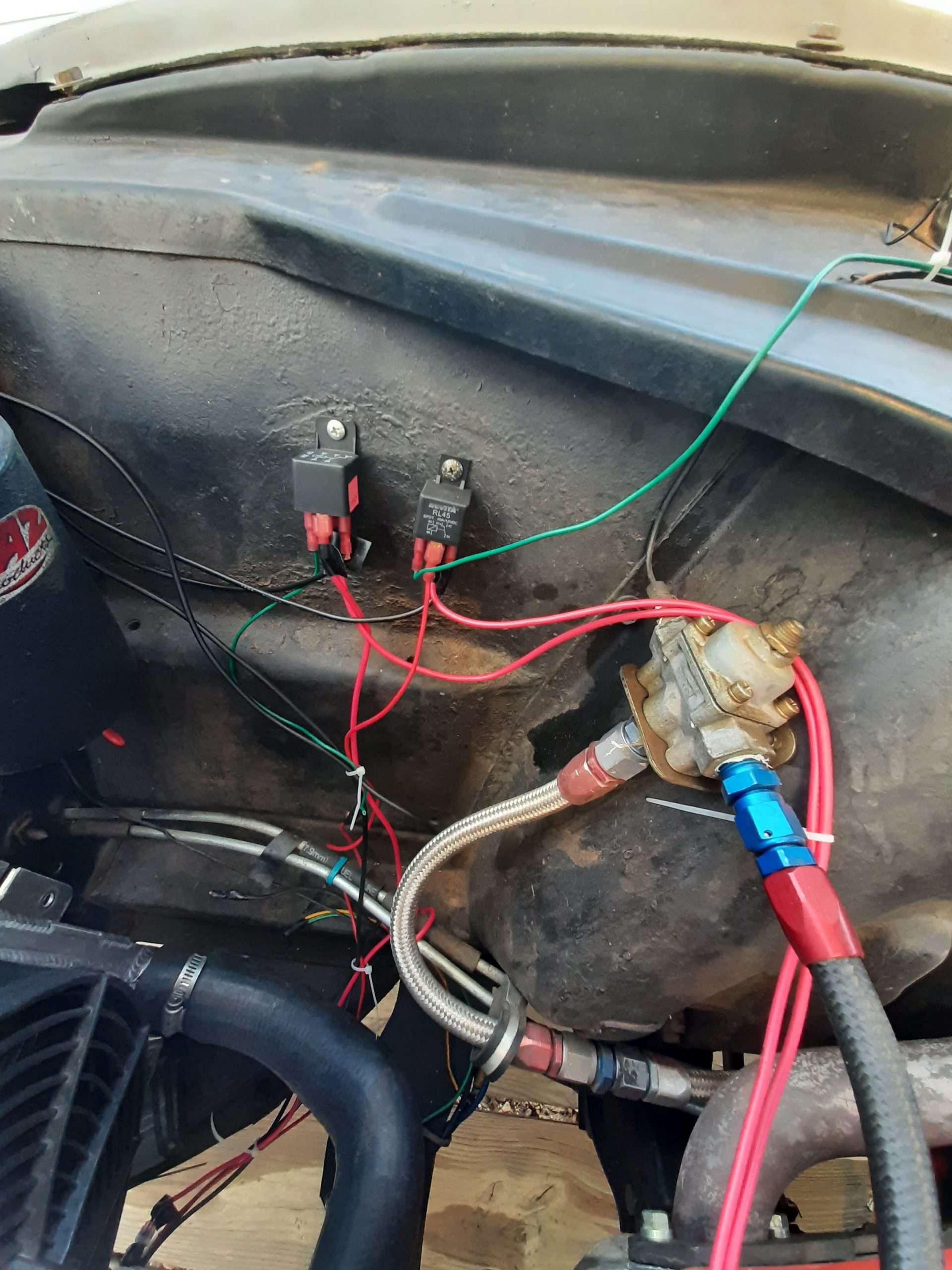 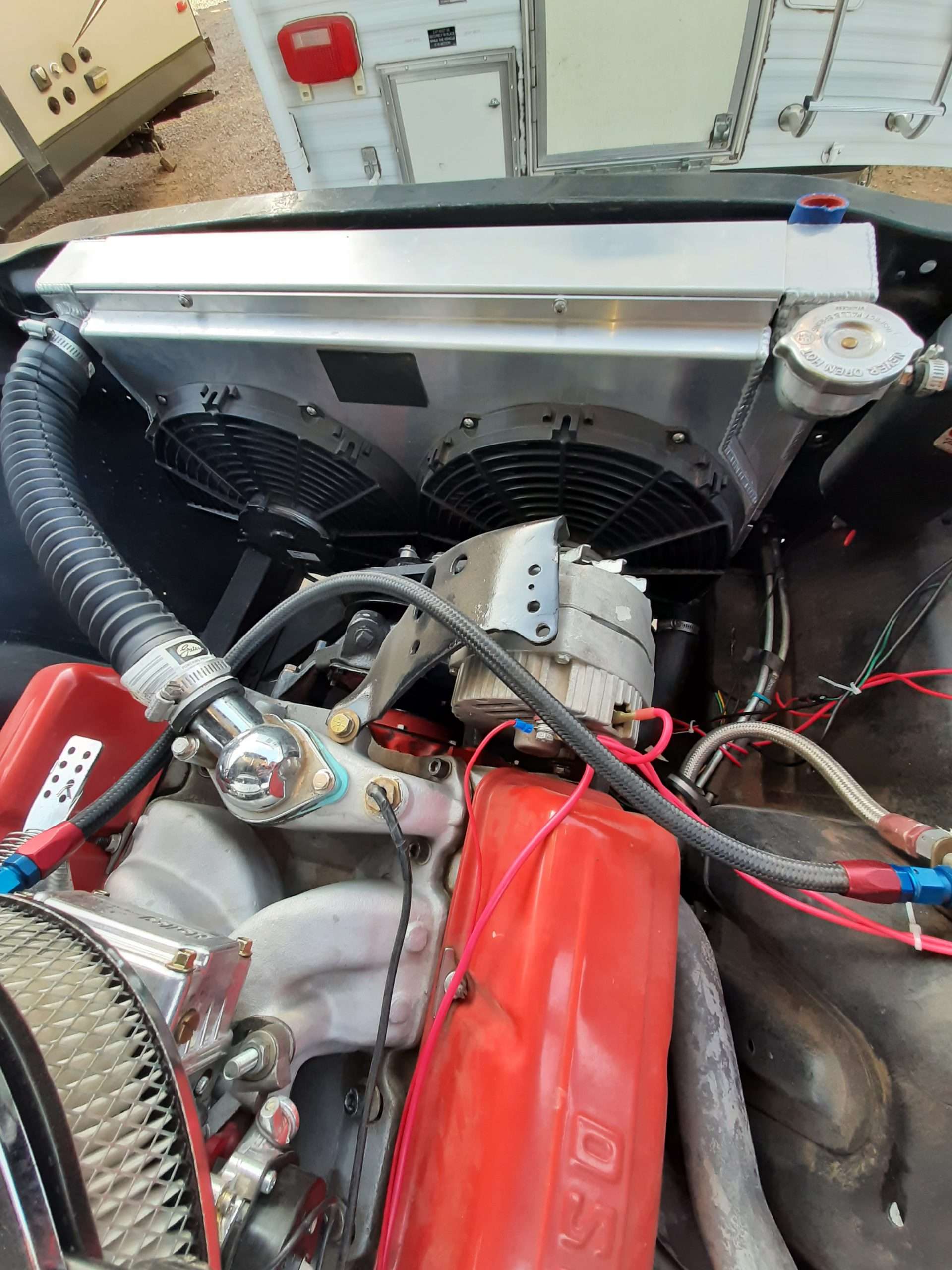 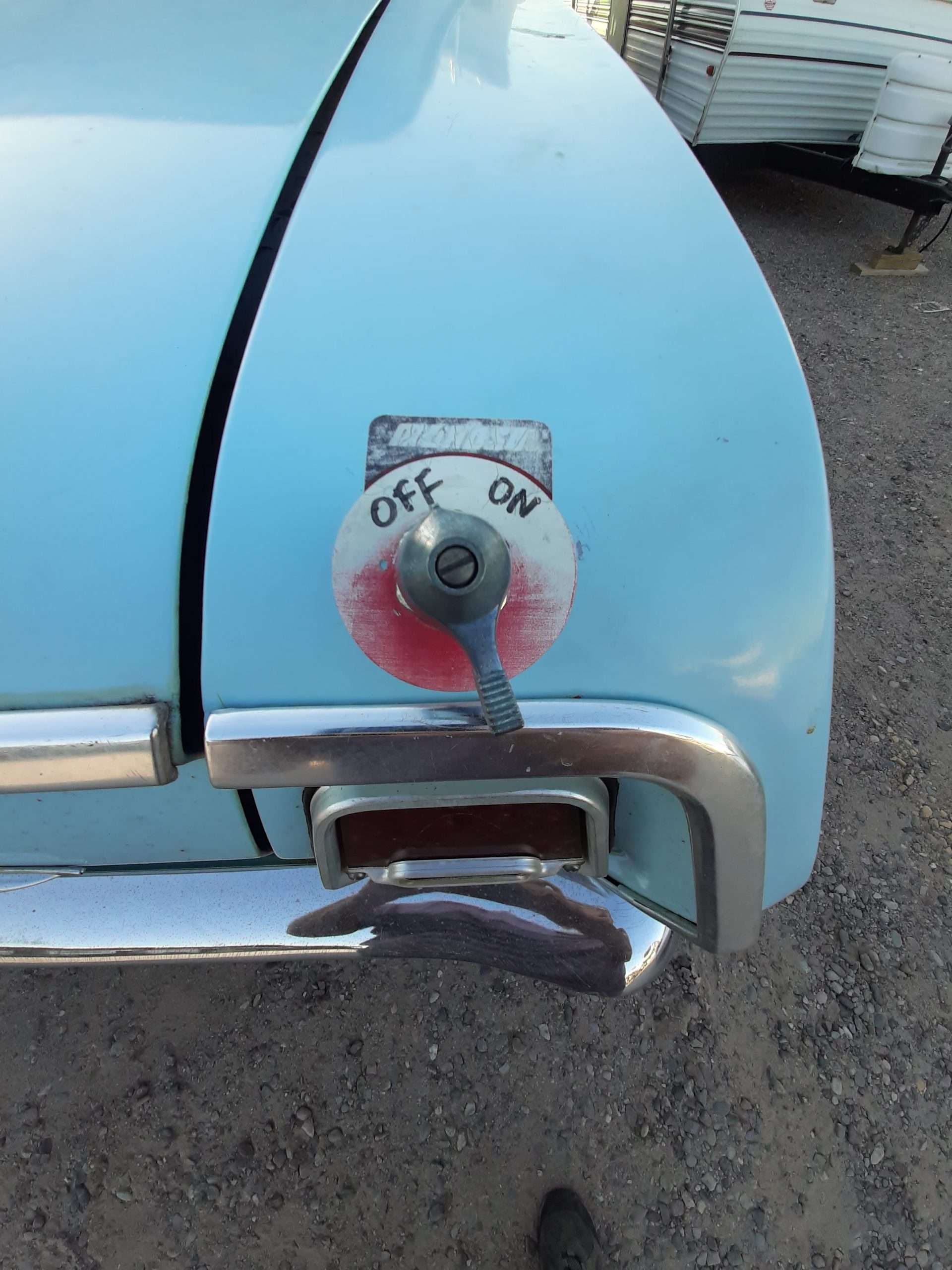 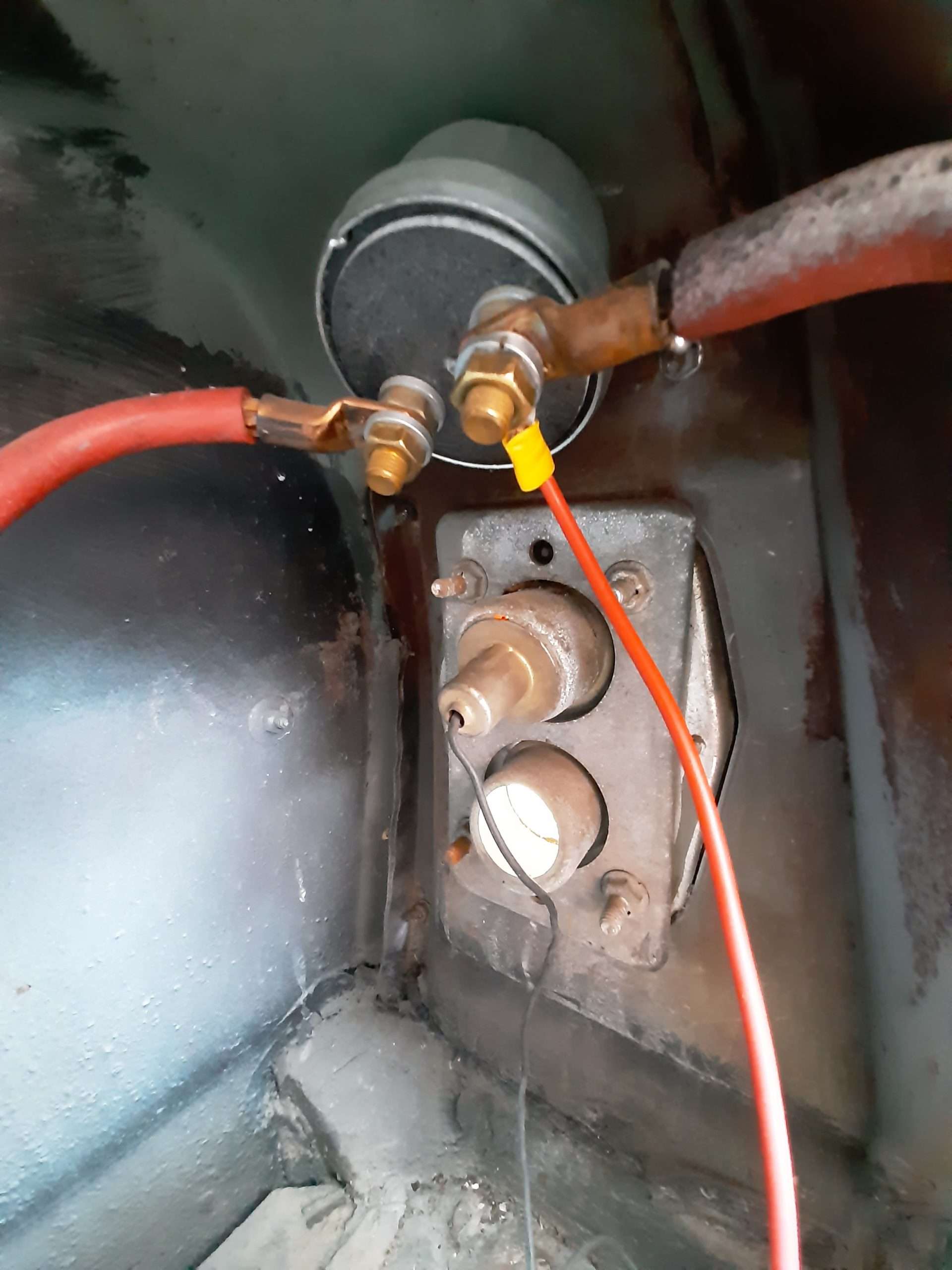 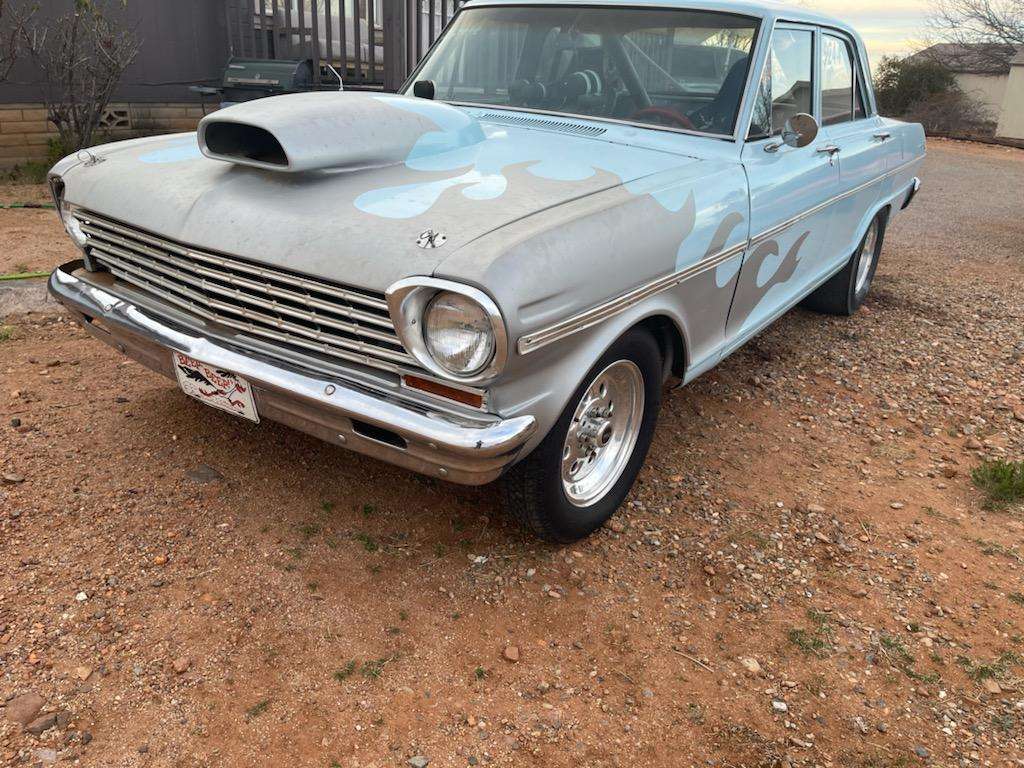