As with so many cars, the journey with my 1957 Buick Wagon started a long time ago.

I was finishing up the paint on my 1929 Ford roadster in 1989 when the thought of purchasing a wagon entered my mind. Naturally, the first thing I thought of was a Nomad. Searching for a car in the local Auto Trader Magazine and Hemmings, I decided that a Nomad was well out of my financial reach. I considered 1957 Buick wagons, but they too, were more than I could afford or were out of state.

A friend of mine, Bill King, who loves to help other people spend their money, found my Buick in the back lot of J.B. Donaldson, the guy who restores steering wheels and advertises in Hemmings and suggested that we should go look at it. It’s interesting that when you first see at a car you’ve been searching for it always looks beautiful. And so, it was with the Buick. A deal was struck for $1200, and we hauled the car away on a trailer.

Once home, I realized just how many parts were missing from the car and how bad it really was. There had at one time been an interior fire and the roof looked like a washboard. There were no interior or trim parts. In fact, just about everything that could be removed from the car with a screwdriver and a socket set was missing and in 1990, the parts were almost as difficult to find as they are today. On the bright side, there wasn’t one speck of rust on the car and other than the roof, which would take me a week of heat shrinking and hammer and dolly work, it was pretty straight.

A few years later I got lucky when I spotted another 1957 Buick wagon for sale at the Glendale Community College swap meet. Fortunately, the interior, with its vast array of indescribable parts was mostly complete. Even though it was a post car, and some parts would not interchange with my hard top wagon, I purchased the car and trailered it home. The next day, like any reasonable car guy would do, I stripped the car completely, keeping everything, I could possibly need and sold off the remains to another unsuspecting car guy with high expectations and unreasonable dreams who would be searching the rest of his life for unattainable parts.

I transplanted a 1980 Camaro Z28 front clip onto the car because no one wants to drive a stock 57 Buick. I also took out the torque tube rear end and replaced it with a 9-inch Lincoln Versailles unit and keeping in mind that I was planning to tow stuff with this car, I installed parallel leaf springs from a 3/4- ton Ford van. The 455 engine and Turbo 400 transmission came from a 1970 Buick that I bought at an auction. All the removed parts, including the ‘70 Buick hulk made the junk guy very happy.

Once the car was drivable, the challenging, fun stuff was over, and it sat for many years. I even put it up for sale a couple of times.

Years ago, someone told me that I wasn’t getting any younger I really should get the Buick done. I had finished most of the body work earlier, so painting the car was fairly simple and didn’t take long. The car looked pretty good even though it had no window glass or interior, we drove it to the Goodguys car show a couple of times. After all, you can haul a lot of swap meet treasures inside the back.

Then, last year, I decided it was finally time to put the interior in and finish the car. The funny thing is that after all this time I had forgotten how many parts made up the interior and more importantly, how most of them went in. Unfortunately, some of the interior trim sat in a plastic tote outside…where it rained, again and again, for years. Guess what happens to metal trim parts that sit in a tub full of water for years? I had a lot of trouble repairing irreplaceable parts.

The interior work took me about 4 months. I created the door panels, carpet pieces and headliner. I even put air conditioning in it. While all this was going on, I passed the seats to a local guy named Chuck because I had heard he did good work and frankly, I was burned out on this car. Mary, my sweetie, has reminded me many times that I am a 90 percenter. When the tedious stuff starts, I just run out of gas and I knew that to get this car done, I was going to need help. Fortunately, Mary encouraged me to keep going and chased parts during the build. Friends Bill, Steve, my son Jason, and many others were always ready to help with the heavy stuff. No one builds a car alone.

Other than the seat upholstery, all the work was done in my home back yard garage. But there are a few little things I still need to do.

Ah, I’ll get to it later.
Jim Hull 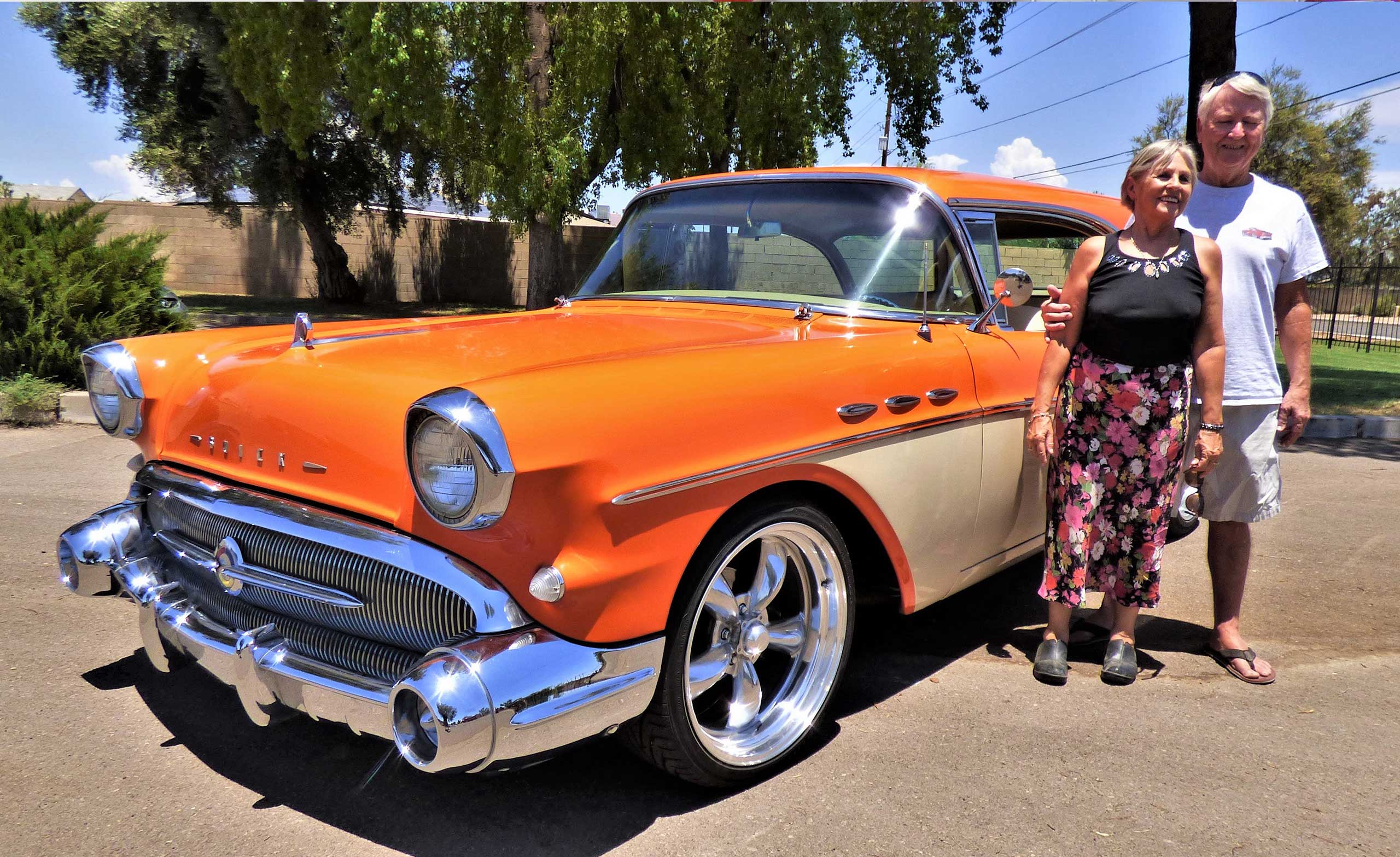